The most important improvements concern: (A) the preprocessing steps - e.g. word segmentation, automatic lemmatization and stemming - for many languages, (B) the functionalities of some co-occurrence tools; (C) the performances of the Modeling of Emerging Themes tool.

A - Regarding the preprocessing steps, three new features have been implemented:

N.B.: For the segmentation of the Chinese texts the 'Pan Gu Segment' library is used (http://pangusegment.codeplex.com/).

N.B.: The main difference between (a) lemmatization and (b) stemming lies in how the inflectional forms of each word are normalized. In fact: (a) in the case of the lemmatization (see https://en.wikipedia.org/wiki/Lemmatisation) the normalization consists in grouping together the inflected forms of a word so they can be analysed as a single item, identified by the word's lemma, or dictionary form (e.g.: 'arguing' -> 'argue'); (b) in the case of stemming (https://en.wikipedia.org/wiki/Stemming), which usually simply removes inflectional endings, the stem need not be identical to the morphological root of the word (e.g.: 'arguing' -> 'argu').

Here is the list of the new languages for which the automatic lemmatization or the stemming process is supported by T-LAB Plus 2017. 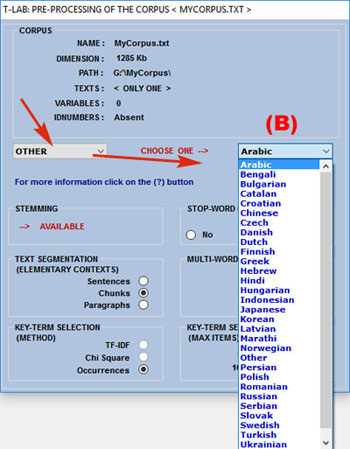 In any case, without automatic lemmatization and / or by using customized dictionaries the user can analyse texts in all languages, provided that words are separated by spaces and / or punctuation.

B - The new functionalities of the co-occurrence tools are listed below.

B.1 - More options are available in the setup form of for the Co-Word Analysis tool 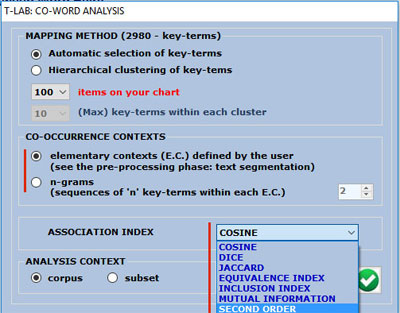 When the 'automatic selection of key terms' is selected, different colours are used for different groups of items in the MDS map (see below); 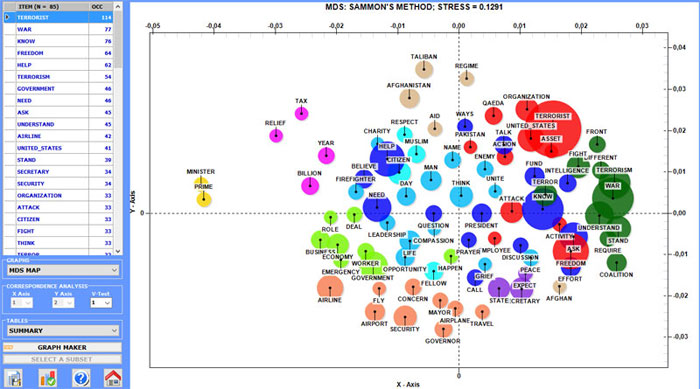 Moreover, by right-clicking the chart area, a new option allows plotting the strongest links (i.e. those with the association index >0.15). 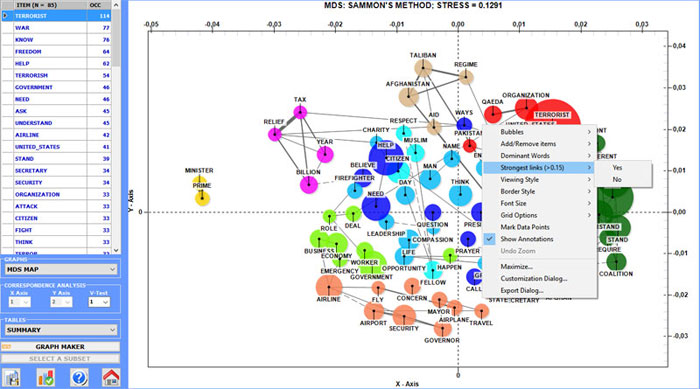 Finally, when the 'Hierarchical clustering of key- terms' is selected, it is possible to create dendrograms including the elements of each thematic nucleus (see below); 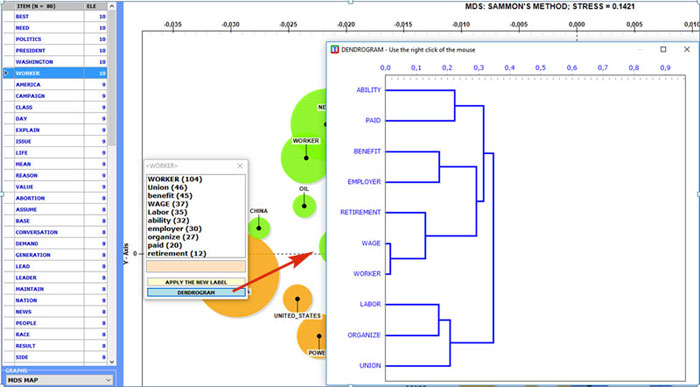 B.2 - When using the Word Associations tool a new option is available which automatically analyses any co-occurrence matrix with up to 3,000 rows and plots a MDS map with the most relevant key-words. This way the user can easily move from the analysis of 'one-to-one' relations to a 'all together' view (and viceversa), either within the entire corpus or within a part of it. 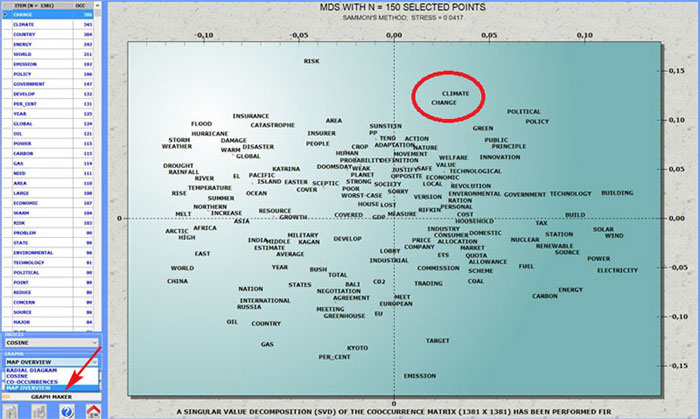 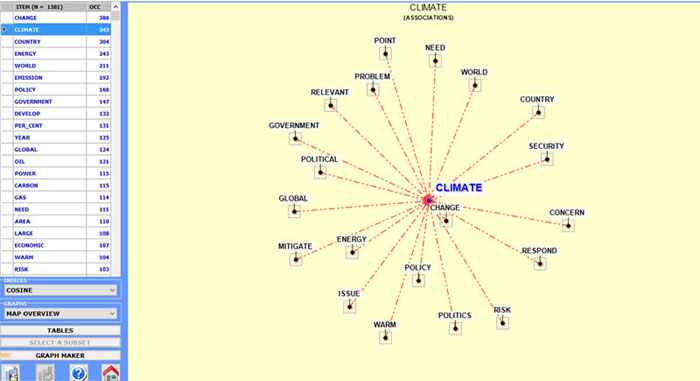 C - The performances of the Modeling of Emerging Themes tool, which uses a topic model algorithm, have been improved and now it allows one to analyse a collection of up to 30,000 documents, provided that the total number of word occurrences (i.e. tokens) doesn't exceed 3,000,000. 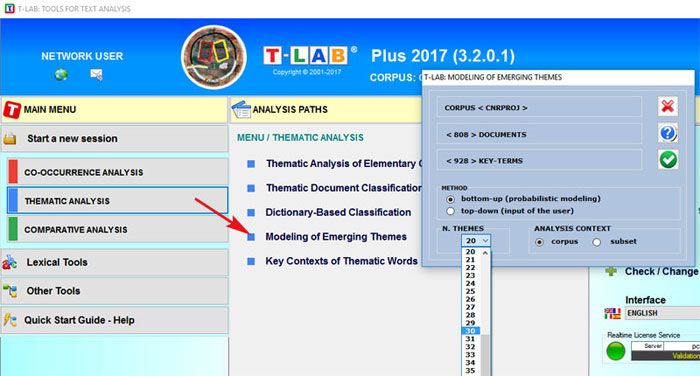 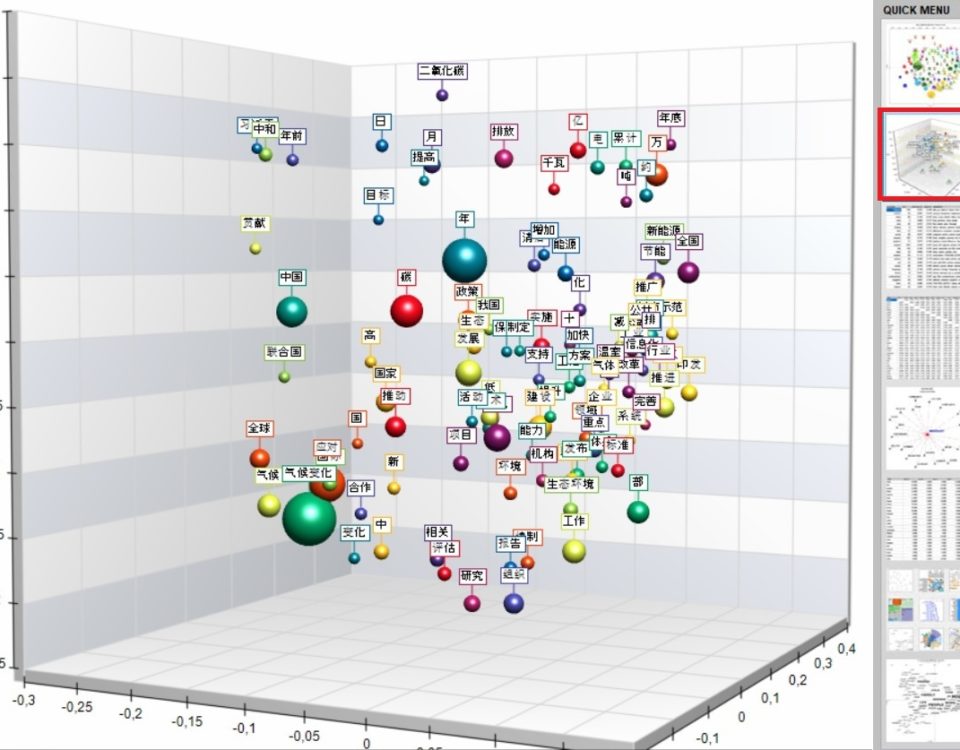